IATA has indicated it supports mandating the use of sustainable aviation fuels (SAF) on international flights departing EU airports, which the European Commission is expected to propose in its upcoming ReFuelEU Aviation legislation, but only with what it considers should be the “right framework” that includes initially restricting the mandate to intra-EU flights. The trade association, representing some 290 airlines worldwide, also wants a higher priority placed on achieving global agreement on longer-term environmental goals. Senior IATA executives Sebastian Mikosz, SVP Member and External Relations, and Michael Gill, Director Aviation Environment, explain to Mark Pilling the association’s position on SAF mandates, efforts with airline members and others to achieve industry consensus on climate targets, and advocating measures that push the industry towards real emission reductions.

Over the coming 18 months, the important legislative ReFuelEU Aviation initiative, the COP26 climate summit, this October’s IATA Annual General Meeting and the ICAO 2022 Assembly will likely shape aviation’s green agenda for the rest of this decade.

With ReFuelEU Aviation, the Commission is preparing legislation that will establish a policy foundation for increasing the production volume and use of SAF in European aviation to help the European Union meet its overall climate goals. The legislative proposal is expected to include mandates covering SAF usage, starting in 2025 at a low level and rising steadily up to 2050 and beyond as production ramps up. Online news service Euractiv reports a starting point of 2% in 2025, moving to 5% in 2030 and to 63% in 2050.

Speaking yesterday during the (Re)Fuelling Flight webinar hosted by NGO Transport & Environment, Filip Cornelis, Director of Aviation at the European Commission, said: “We agree that we need a ramp up that is both ambitious and realistic because of course there is no point undershooting what is possible, but we should not also overshoot and create an artificial shortage in the market that doesn’t help anybody. So, it is really a question of hitting the right targets to end in 2050 at a level of about 63% SAF in aviation in Europe.”

A ramp up with a low starting point, especially as current SAF production is so limited, is not too contentious, but whether the mandated percentages apply to all flights in and out of the EU, or just to intra-EU flights, is likely to be controversial. There are two schools of thought. In March, a coalition including European low-cost carriers easyJet, Ryanair, Wizz Air and Transport & Environment, wrote to the Commission, saying: “Excluding long-haul flights from the SAF mandate would mean the very area of our sector that most needs to decarbonise would not be covered at all by this legislation.”

IATA has a different view. “We believe ReFuelEU can be a useful policy instrument to promote the commercial deployment of SAF, but I qualify that with ‘if it’s accompanied by the right framework’,” Michael Gill told GreenAir. “It is the geographic scope that is an issue for us, and we believe that at least in its initial phase it should only be applicable to intra-EU flights.

“We are looking at a completely nascent industry and we believe that to jump to a significant portion [of SAF usage], there is more chance of achieving this successfully if this is limited geographically,” he said.

Moreover, IATA is worried that a move to include international flights could backfire. “We have seen in the past, with the experience of the EU Emissions Trading System, when Europe tried to adopt extra-territorial measures, that there was significant pushback from third countries and their airlines,” recalled Gill.

That move created considerable political tension and the threat of a trade war between Europe and other States, including Russia, India, China, and the United States. The ReFuelEU initiative, centred again on environmental regulation, is “very much the same dynamic,” said Gill. “The view of IATA members is that when you are in the initial phase it is unnecessary to give it too broad a scope.” The idea would be to start with intra-European flights and expand the scope later to include international ones.

Cornelis told the (Re)Fuelling Flight webinar: “The way we envisage this mandate is that the minimum blend to be prescribed would need to be one available at all EU airports and everybody who is uplifting jet fuel at a European airport would be uplifting the EU blend. This will be, in our view, the most simple and effective way to go forward, and also with the largest impact.”

If the EU goes ahead with its own standards and include international flights, the risk is other regions will follow suit and develop their own standards thus creating a patchwork of regional SAF solutions, warned IATA’s Mikosz. “This would benefit neither the industry nor the goal of reducing CO2 emissions at a global level,” he added.

IATA is setting its sights on a global prize. “It is more of a priority to get global agreement on a long-term environmental goal, and we are putting all our efforts into that,” said Gill. “We are supporting ICAO’s efforts to get a long-term aspirational goal for international aviation at the next Assembly in 2022. We would hate to see the EU SAF mandate muddy the waters.”

Many airlines have already set climate targets that commit them to net zero carbon emissions by 2050. This is a more ambitious target compared with IATA’s 2009 commitment, which obliges IATA members to cap aviation emissions at 2020 levels and to reducing them net 50% from 2005 levels by 2050. IATA estimates that a third of global traffic is now covered by carriers with net zero by 2050 goals, and there are calls, recognised by outgoing IATA Director General Alexandre de Juniac in March, to update the association’s commitment to this more ambitious level.

In a recent GreenAir Commentary article, ICCT’s Brandon Graver suggested IATA should consider making a net zero commitment at the COP26 meeting this November and adopt the net 50% reduction as a mid-term target. In addition, the association should push ICAO to secure a net zero goal from international aviation by 2050 at its Assembly in 2022. “By establishing bold targets for reducing aviation emissions and ensuring other airlines do their part, the new IATA Director General, Willie Walsh, can make a big impact in his new position,” he wrote.

Gill said the association and the Air Transport Action Group coalition of airlines, airports, aircraft manufacturers and others, are in discussions about a potentially more ambitious industry-wide target, which could be proposed at the IATA AGM due to take place in Boston in early October.

Getting IATA’s entire membership on board with more ambitious targets is a tough task, said Mikosz. He is only too aware of the extremely difficult balancing act the association performs to achieve a consensus position on topics as controversial as the environment. “There is a need to recognise we have different members on different continents. The biggest challenge is the need to bring everybody under one roof,” he said.

There are state-owned and privately-owned airlines, and members in countries such as China, where the overall target year for achieving net zero carbon emissions does not yet match the 2050 ambition of most developed countries. “It’s a UN type of job,” added Mikosz.

While there will be pressure from many quarters for the net zero emissions by 2050 goal, one possibility is a global aspirational target could be set at 2060 or 2065 with a recognition that some regions might go faster than this.

So, what does all this mean for SAF rules? The Commission will press ahead with ReFuelEU, which includes maritime as well as aviation, and produce a mandate for agreement by Member States. The draft ReFuelEU regulation was expected to be published in April, but this has slipped. It is now expected to be published in mid-July, said Cornelis. This means it could take until around May 2022 for it to become law. The UK has indicated it will put forward its own mandate proposal for enactment in 2025.

The likelihood of a global SAF mandate anytime soon appears very low. The ICAO Conference on Aviation and Alternative Fuels (CAAF) in 2017 endorsed a vision that a “significant proportion” of conventional fuel be substituted with SAF by 2050. It also agreed to convene another CAAF no later than 2025 to update the vision to include a quantified SAF target, but it is extremely unlikely to have a global agreement on a global SAF mandate, believes Gill. “There is no consensus in ICAO on what that target should be yet. IATA also does not have a position from our members on what a global SAF target under ICAO could be or indeed to change track and push ICAO for a global SAF mandate,” he added.

Talk of commitments, targets and mandates is all very well, and the political dance that is taking place to set them is in full swing. For IATA’s Gill, it is important not to lose sight of what is important. “We need to push the industry forwards to ambitious, real, emissions reduction,” he said.

“All [airline] CEOs say it is a real strategic issue,” said Mikosz. “At our last board meeting we had just two points on the agenda: industry restart and the environment. Nobody takes this lightly. We need to have a blend of technologies and a variety of business approaches. We are putting SAF as number one in that regard.”

IATA chief Willie Walsh told the recent World Aviation Festival: “There are a lot of initiatives out there, and critically people recognise that this has to be done. There is no argument here, the industry is up for this challenge.” 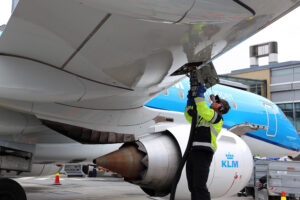