Eight proposed sustainable aviation fuel (SAF) projects have been shortlisted by the UK’s Department for Transport (DfT) to share up to £15 million ($20m) in grant funding to support early-stage development of large-scale SAF production plants in the UK. All selected projects have the potential to reduce emissions by more than 70% on a lifecycle basis when used in place of conventional fossil jet fuel, said the DfT. The plants plan to produce jet fuel from a variety of sources including sewage; household and commercial waste; alcohol derived from wastes; and from captured atmospheric carbon dioxide. Organisations standing to gain from the funding include Velocys, Fulcrum BioEnergy, LanzaTech, Lanzajet, Advanced Biofuel Solutions, Alfanar Energy, Green Fuels Research, Nova Pangaea and Carbon Engineering, with a few of the projects shortlisted still at their feasibility stage.

Research carried out for the DfT indicates that by 2040 the SAF sector could generate between £0.7 billion and £1.66 billion a year for the UK economy, with potentially half of this coming from the export of intellectual property and the provision of engineering services. Between 5,000 and 11,000 green jobs could also be created across the nation and SAF production could also increase UK fuel security.

The eight projects shortlisted in the Green Fuels, Green Skies (GFGS) competition are:

The eight projects are understood to be assured of funding with the amounts to each to be announced very shortly and subject to contract. The bulk of the funding will go to those projects in the pre-FEED or FEED phase with around £2 million expected to be awarded to those in their feasibility stage. The GFGS funding period is a fixed term from August to the end of March 2022.

Sean Doyle, CEO of British Airways, which is involved in four of the projects, commented: “We’re determined to transform the sustainability of our industry and this potential GFGS government funding is critical in helping us to show the feasibility of building SAF plants. These plants would be a game-changer for our industry, not only delivering SAF but also creating many hundreds of highly skilled jobs while increasing economic growth around the UK.”

Henrik Wareborn, CEO of Velocys, which benefited from funding under the government’s £20 million F4C competition held in 2017, said: “We welcome this new funding as it will help bring Altalto closer to the production of SAF. The GFGS initiative highlights the importance of building SAF facilities throughout the country that will help the UK not only to meet the targets set but also make a quantifiable impact on climate change.”

Added Jimmy Samartzis, CEO of US-based LanzaJet, which is partnering on one of the shortlisted projects with British Airways and Nova Pangaea, said: “Together, we are grateful to the Prime Minister and DfT for their support in advancing the production of SAF in the UK.”

The Green Fuels Research (GFR) project with Petrofac and Cranfield University will demonstrate an integrated route to SAF using sewage sludge as feedstock and encompasses engineering design and construction of a UK demonstration plant capable of generating the quantities of fuel to allow certification to international standards. This in turn, says GFR, will lead to a first-of-a-kind commercial refinery and roll-out to several locations where airports, pipeline terminals and wastewater treatment works are in close proximity. The company says around 53 million tonnes per annum of untreated sewage sludge are collected in the UK from about 8,500 wastewater treatment works.

Commenting on the competition announcement, Green Fuels CEO James Hygate said: “We’re delighted to have this opportunity to prove the environmental and commercial viability of the FIREFLY route, which integrates several existing technologies into a sustainable industrial process. Among many advantages, FIREFLY will use fully biogenic feedstock which will emit no fossil carbon, won’t contribute to deforestation or compete with food production, and will not rely on imports with long, high-emission supply chains. And perhaps most importantly, we expect to demonstrate exceptional carbon savings, meaning this is potentially a very fast route to decarbonising aviation that won’t rely on as yet unknown technologies.”

The competition has been managed by consultants Ricardo and once the funding has been distributed, it will monitor the eight projects on behalf of the DfT.

“We have been amazed by the diversity and creativity of the entries,” said Alexandra Humphris-Bach, Ricardo Principal Consultant. “All the selected projects have a clear potential to produce SAF capable of reducing emissions by more than 70% on a lifecycle basis, when used in place of a conventional fossil jet fuel.”

The UK’s Transport Secretary, Grant Shapps, said: “Aviation will be central to our future growth and plans to build back greener from the pandemic, which is why we have invested over £20 million in the past year to decarbonise the sector in line with our world-leading net zero targets.

“With less than 100 days to go until COP26, we’re ramping up our efforts even further to help companies break ground on trailblazing waste to jet fuel plants and put the UK at the forefront of international SAF production.”

Photo: British Airways is involved in four of the eight shortlisted projects 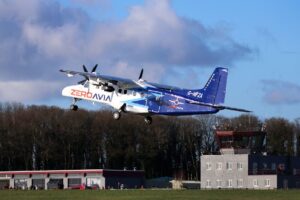 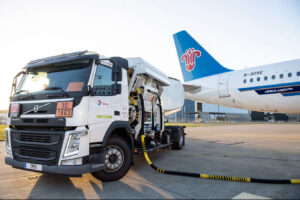