Australia’s Qantas Group, which includes Qantas Airways and its low-cost sibling Jetstar, has unveiled a four-pillar strategy to achieve net zero emissions by 2050, targeting a 25% cut in carbon emissions by 2030, based on 2019 levels. The Qantas Group Climate Action Plan is focused on the use of sustainable aviation fuels, fuel efficiency initiatives, waste reduction and an expanded offsets programme concentrated on projects in Australia. Headlining the strategy is a commitment to use a 10% blend of SAF across the group by 2030, ramping to 60% by 2050, in addition to an average annual fuel efficiency target of 1.5% through fleet renewal and operational efficiencies in the air and on the ground. The company has also pledged to eliminate single-use plastics by 2027 and to cease sending general waste to landfill by 2030. The Qantas plan comes just days after a new report by the Sustainable Aviation Fuels Alliance of Australia and New Zealand (SAFAANZ) that urged the formation of a Jet Council to help shape and expedite the establishment of an Australian SAF industry, reports Tony Harrington.

“Aviation is a crucial industry, especially in a country the size of Australia,” commented Qantas Group Chief Executive Officer Alan Joyce on the publication of the group’s new Climate Action Plan. “Having a clear plan to decarbonise Qantas and Jetstar so we can keep delivering these services in the decades ahead is absolutely key to our future. We’ve had a zero net emissions goal for several years, so today’s interim targets are about accelerating our progress and cutting emissions as quickly as technology allows. Hydrogen or electric-powered aircraft are several decades away, particularly for the length of most [of our] flights, so our plan is focused on the technology that is within reach today.

“One benefit of setting these targets now is sending a clear signal that we’re in the market for large volumes of sustainable aviation fuel, for carbon offset projects and for products that can be recycled. That will hopefully encourage more investment and build more momentum for the industry as a whole.”

The Qantas Group has already committed an initial A$50 million ($37m) towards the creation of a SAF industry in Australia and has partnered with Air bp to explore ways of doing so. Since early this year, SAF has comprised 15% of the fuel used by Qantas on its flights from London’s Heathrow Airport, both nonstop to Australia, and increasingly to Singapore. As well, the company signed a second major agreement with US biofuels company Aemetis in March to acquire almost 20 million litres of SAF per year from 2025 to help power its flights from airports in California – it currently serves Los Angeles and San Francisco – and has revealed that negotiations are underway to secure SAF in other offshore markets. It has also intensified its advocacy for a home-based SAF industry, urging “all levels of government to lend support to ensure Australia manufactures the biofuel like the UK, US and Europe already are.”

To further help reduce its emissions, Qantas recently announced plans to acquire up to 134 Airbus A320neo and A220-family jets to replace, over a 10-year period, its current fleet of narrowbody Boeing 737-800 and 717 twinjets. The airline expects to finalise a firm order for the first group of new Airbus jets by mid-2022, to reduce fuel burn by an estimated 20%, while the low-cost Jetstar will take delivery of the first of 18 Airbus A321LR aircraft in July. As well, Qantas International is progressively introducing Boeing 787-9 Dreamliner aircraft in place of its now-retired Boeing 747-400s, has reduced its fleet of Airbus A380s and, as part of ‘Project Sunrise’ plans to fly nonstop services from eastern Australia to London and New York, and has flagged an order for ultra-long-range and fuel-efficient Airbus A350-1000 aircraft. On the ground too, the company is aiming for further efficiencies including the electrification of vehicles where possible and, from this year, the use of 100% renewable electricity to power all Qantas Group buildings in Australia.

Recognising the interim requirement to use offset programmes to achieve carbon reduction targets, Qantas has also signed a memorandum of understanding (MoU) with the Australia and New Zealand Banking Group (ANZ) and the Japanese oil and gas exploration company Inpex Corporation to evaluate a project in Western Australia which would combine carbon farming and renewable biofuels in the Wheatbelt region, an area of equivalent size to Belgium. The project will rely upon collaboration between the three companies, landowners and rural communities.

“It provides an opportunity to support reforestation and decarbonisation using drought-resilient native tree crops, integrated with existing farming systems,” said the airline. “Having completed an extensive initial assessment of the carbon farming project, the parties will undertake a more detailed feasibility study into the harvesting and processing of native biomass crops and selected agricultural waste residues to produce low-carbon renewable biofuels. Under the MoU, the first planting of native trees is expected to take place in the [southern hemisphere] winter of 2023.”

Qantas Group Chairman Richard Goyder added: “It’s exciting to see technological advances overseas, particularly in the development of sustainable aviation fuel. Australia already produces significant amounts of feedstock for sustainable aviation fuel, but exports it to other countries. In the future, these feedstocks could be used to build a domestic industry, creating jobs and fuel security here in Australia. It’s not just a huge opportunity, it is the right thing to do. Achieving net zero emissions targets will not be easy and it will take sustained and cooperative action by everyone at the Qantas Group, as well as the entire global aviation value chain, governments and investors. Supportive government policy is critical for the aviation industry to transition to low and zero-emissions technologies.”

The report recommends an initial SAF blending mandate of 2.5% in Australia, increasing to 3% by 2030. A 2.5% requirement would require approximately 235 million litres of SAF to be integrated into the aviation fuel supply chain. This volume would be sufficient to warrant the construction of at least one SAF refinery in Australia, adds the report.

“Following the lead of the UK and its Jet Zero Council, Australia should immediately establish a Jet Council to connect the state and federal governments with aviation industry stakeholders to guide the ongoing development of sustainable aviation policies,” said Shahana McKenzie, CEO of industry group Bioenergy Australia, which established the SAFAANZ to highlight and push for local SAF production in both Australia and New Zealand, the latter having recently flagged plans to introduce a SAF blending mandate.

The group has 22 members from the aviation and energy sectors, among them Qantas, Air New Zealand and Virgin Australia – the three largest airlines in the Australasian market – plus the region’s largest airport, Sydney Kingsford-Smith, the new Western Sydney Airport, which is due to open in 2026, and Boeing. Other members include major waste-to-fuels producer Neste and SAF specialists LanzaJet, World Fuel Services and Gevo.

“As a priority,” said McKenzie, “the Jet Council would work with the various levels of government, along with key industry participants, to guide and support pathways for SAF research and development in Australia, as well as guide the design and implementation of policies to overcome existing barriers to SAF development.”

The SAF report has landed as the Australian government – globally criticised during Glasgow’s COP26 summit as a climate action laggard – prepares for a general election, in which the impact of climate change and the need to accelerate decarbonisation are expected to be key issues following recent catastrophic floods and bushfires. The report highlighted the Australian Bioenergy Roadmap, released late last year by the federal government, which identified the significant environmental benefits of SAF use and economic growth from SAF production. “The Bioenergy Roadmap showed that Australia could be producing 18% of the country’s aviation fuel market by 2030 if a favourable policy and market environment existed,” said SAFAANZ Chair Heidi Hauf, who is also Boeing’s Regional Sustainability Lead for Asia-Pacific.

“Australia could be the SAF capital of the Asia-Pacific region, if we act now,” added McKenzie. “Beyond emissions reduction, this initiative supports jobs in regional Australia, economic development and fuel security.” 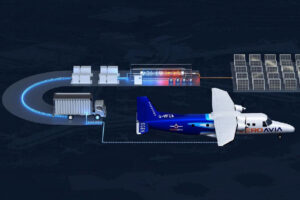 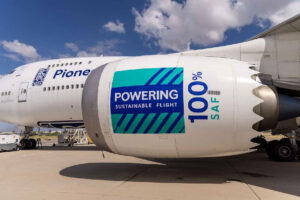 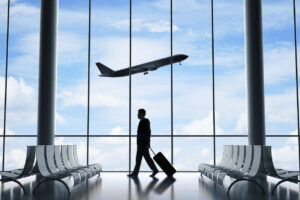 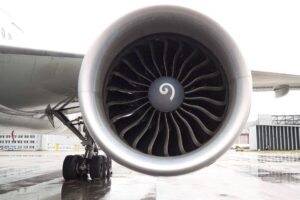