Niche US carrier Hawaiian Airlines, whose mid-Pacific hub is at serious risk of lasting damage from the impact of climate change, has outlined a package of measures to help decarbonise its operations, from initiatives including the use of sustainable aviation fuels to investment in Boston-based REGENT, which is developing an electric ‘flying boat’ with capacity for up to 100 passengers. The Honolulu-based airline, which operates a three-tier network of intra-island, Hawaii-US mainland and international services, has just released its 2022 ‘Kuleana’ report, detailing initiatives across a range of sustainability metrics. On environmental threats, the report says climate change has the potential to have a major impact on the airline’s business as changes in long-term weather patterns are likely to result in sea level rise, more frequent and extreme weather, and rising mean temperatures, threatening its island infrastructure and operations. Hawaiian revealed that as part of its response, it was pursuing SAF deals on the US mainland and exploring opportunities to establish supplies within the Hawaiian Islands, reports Tony Harrington. Separately, it announced an investment of undisclosed scale in REGENT, expressing particular interest in its proposed all-electric Monarch Seaglider, potentially for deployment on short intra-island sectors.

In addition to significant engagement on climate mitigation with Hawaiian community and tourism organisations, Hawaiian has been progressively reducing its own emissions on the ground and in the air through the introduction of new Airbus A321neo jets for Hawaii-mainland flights, and operational initiatives ranging from single-engine taxiing and route optimisation technologies to use of ground power and pre-conditioned air instead of reliance on aircraft auxiliary power units, and is preparing to introduce more fuel-efficient, wide-bodied Boeing 787-9s. The airline said that in 2021, CO2 emissions intensity from its passenger and cargo-only operations was 6% lower than in 2019, while passenger flights alone delivered 7% lower emissions intensity, but added SAF would deliver even better outcomes.

“Using jet fuel derived from more sustainable sources has the potential to be the most effective way for us to decarbonise our operations,” said the airline in its 2022 Corporate Kuleana (Responsibility) Report. “We are actively exploring SAF offtake agreements with providers in the continental US markets we serve and exploring opportunities to develop SAF supply in the Hawaiian market. We recognise the challenges of scaling up SAF, and support government programmes to accelerate its production, availability and distribution at commercially viable prices.”

The report specifically details the potential and increasing risks of climate change to the airline’s operations in its home market, explaining: “Sea level rise may impact locations close to the shore, including airport runways and visitor destinations, which could disrupt our flight operations, affect demand and lower our revenue. Hurricanes, typhoons, and other extreme weather events are likely to become more frequent and intense and may impact our flight operations and the resiliency of our infrastructure. Higher average temperatures may result in payload restrictions, as well as increased fuel consumption and cooling costs, which could impact our revenue, flight operations and operating costs.

“Use of SAF will reduce carbon emissions and enhance resiliency through diversification of energy sources. Potential local SAF production may reduce logistics costs and complexity.”

In addition to its endorsement of SAF, Hawaiian has announced a strategic investment in REGENT Craft, highlighting interest in that company’s all-electric Monarch Seaglider, which is targeted for 2028 entry into service. The airline said it would support the design of the aircraft, which is being developed to carry a combined complement of 100 passengers and crew, and would have great potential for Hawaiian’s extensive inter-island services that it currently performs with Boeing 717 jets.

Avi Mannis, Chief Marketing and Communications Officer at Hawaiian Airlines, said: “Innovative inter-island transportation has been core to our business since 1929, when we replaced steam ships with airplanes. We are excited to be an early investor in REGENT and to be involved in developing their largest Seaglider – a vehicle with great potential for Hawaii. We look forward to working with REGENT to explore the technology and infrastructure needed to fulfil our vision for convenient, comfortable and environmentally-sustainable interisland transportation.”

REGENT, a venture-backed aerospace and maritime manufacturer, described its Seaglider as “an all-electric, wing-in-ground-effect craft that operates within a wingspan of the water’s surface, and couples the speed of an airplane with the operating cost of a boat. Built to the same safety standards as all modern aircraft and watercraft, our vehicle will service routes of up to 180 miles (290 kilometres) with existing battery technology and routes of up to 500 miles (805 kilomertres) with next-gen batteries, all via existing dock infrastructure.”

REGENT CEO Billy Thalheimer said seagliders would sustainably transform transportation between coastal communities or archipelagos such as those of the Hawaiian Islands. “Through close partnerships with design partners and strategic investors such as Hawaiian Airlines, we can fully understand our operators and unlock their ability to provide zero-emission transportation solutions to their customers.” 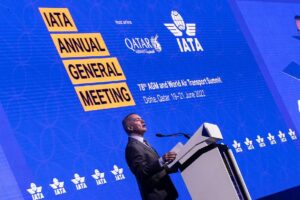